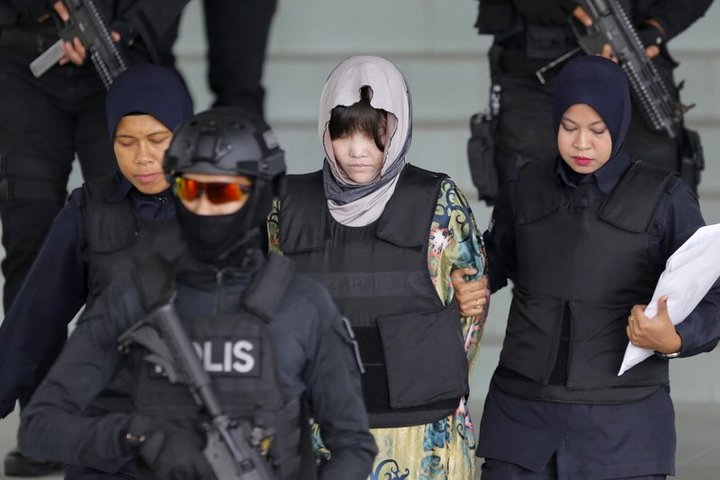 SHAH ALAM, Malaysia (AP) — Two Southeast Asian women on trial for the brazen assassination of the North Korean leader’s half brother were told to begin their defense Thursday, extending the trial for several more months. Indonesia’s Siti Aisyah and Vietnam’s Doan Thi Huong are accused of smearing VX nerve agent on Kim Jong Nam’s face in an airport terminal in Kuala Lumpur on Feb. 13, 2017. High Court Judge Azmi Ariffin said he was not persuaded by the defense argument that the women thought they were taking part in a prank for a hidden-camera show. He said enough evidence had been presented in the six-month trial so far to infer the women and four North Korean suspects had engaged in a “well-planned conspiracy” to kill Kim “systemically.” The prosecution laid out enough evidence of the women’s guilt for the case against them to proceed, “I therefore call upon them to enter their defense,” the judge said after reading his ruling for more than two hours. Indonesian Ambassador Rusdi Kirana told reporters outside court that he was shocked by the ruling but his government will abide by it. The judge could have acquitted the women. Aisyah, 25, and Huong, 29, appeared to be calm and told the judge they would testify under oath in their defense. They are the only suspects in custody and face the death penalty if convicted. The four North Korean suspects fled the country the same morning Kim was killed. According to the case presented so far, the four men known to Aisyah and Huong by code names recruited and trained the two women to accost strangers in a similar fashion to the day they attacked Kim, and they provided the women with the banned chemical weapon that they smeared on his face. Airport security footage shown in court captured the moment of the attack and prosecutors also said the camera images linked the women to the four male suspects. Shortly after Kim arrived at the airport, Huong was seen approaching him, clasping her hands on his face from behind and then fleeing. Another blurred figure was also seen running away from Kim and a police investigator testified that it was Aisyah. Kim died within two hours of the attack. Defense lawyers have said the prosecution failed to show the two women had any intention to kill — key to establishing they are guilty of murder. But the judge said their intention to kill can be inferred from targeting Kim’s eyes, where the nerve agent would penetrate faster. He said that evidence pointed to a “simultaneous act” by the women. The judge also said their hurrying to separate bathrooms also established their intention to cause Kim’s death. “I have no slightest doubt that their desperate act of rushing to the toilets is to solely decontaminate the poison on their hands,” Azmi said. He said they seemed worried and tense before washing their hands, but relaxed afterward. “The onus is on the accused to explain their conduct,” he added. Lawyers for the two women have said their clients were pawns in a political assassination with clear links to the North Korean Embassy in Kuala Lumpur. Azmi said he “cannot rule out that this could be a political assassination,” but found no concrete evidence of one. The defense has argued the real culprits are the four North Korean suspects and have pointed to an embassy employee who helped arrange their travel as evidence of embassy involvement. Malaysian officials have never officially accused North Korea and have made it clear they don’t want the trial politicized. Kim, the eldest son in the family that has ruled North Korea since its founding, had been living abroad for years after falling out of favor. It is thought he could have been seen as a threat to North Korean leader Kim Jong Un’s rule.
Meer nieuws van Nederland Actueel
Politie Twee mannen aangehouden voor afpersing
Economie Europese webwinkels verkochten ruim 63 procent meer aan Nederlanders
Economie Stijging pensioenpremies 2022 verwacht
Zorg Nieuwe techniek voor veilige en effectieve behandeling van hartritmestoornissen
Coronavirus UMCG: Eerste resultaten onderzoek naar nieuw coronavaccin hoopgevend; vrijwilligers gezocht voor fase 2
Politie Misdaadverslaggever Peter R. de Vries neergeschoten
Cultuur Zes leraren strijden om landelijke titel Filmleraar van het Jaar 2021
Ministeries Doorgeven alcohol aan minderjarige dubbel beboet per 1 juli
Buitenland Nederland stuurt miljoenen vaccins voor Kaapverdië, Indonesië en Covax-programma
Coronavirus Onderzoek RUG: Vakantie naar het buitenland ook dit jaar nog beperkt
Coronavirus CoronaCheck-app nu ook inzetbaar voor reizen
Politie Verdachte aangehouden voor doorrijden na ongeluk in Amersfoort
Politiek Straf doodslag omhoog van 15 naar 25 jaar
Cultuur Koningin Máxima bezocht Eye ter gelegenheid van 75-jarig bestaan
Zorg Aantal tienermoeders in tien jaar gehalveerd
Koninklijk Huis Koningin Máxima spreekt digitaal met Ivoorkust over digitale financiële diensten
Economie Werkloosheid daalt naar 3,3 procent in mei
Klimaat Uitstoot broeikasgassen hoger in eerste kwartaal 2021
Coronavirus In februari zijn 2,5 duizend mensen overleden aan COVID-19
Coronavirus Janssen-vaccin wordt niet meer geprikt bij mensen onder de 44 jaar